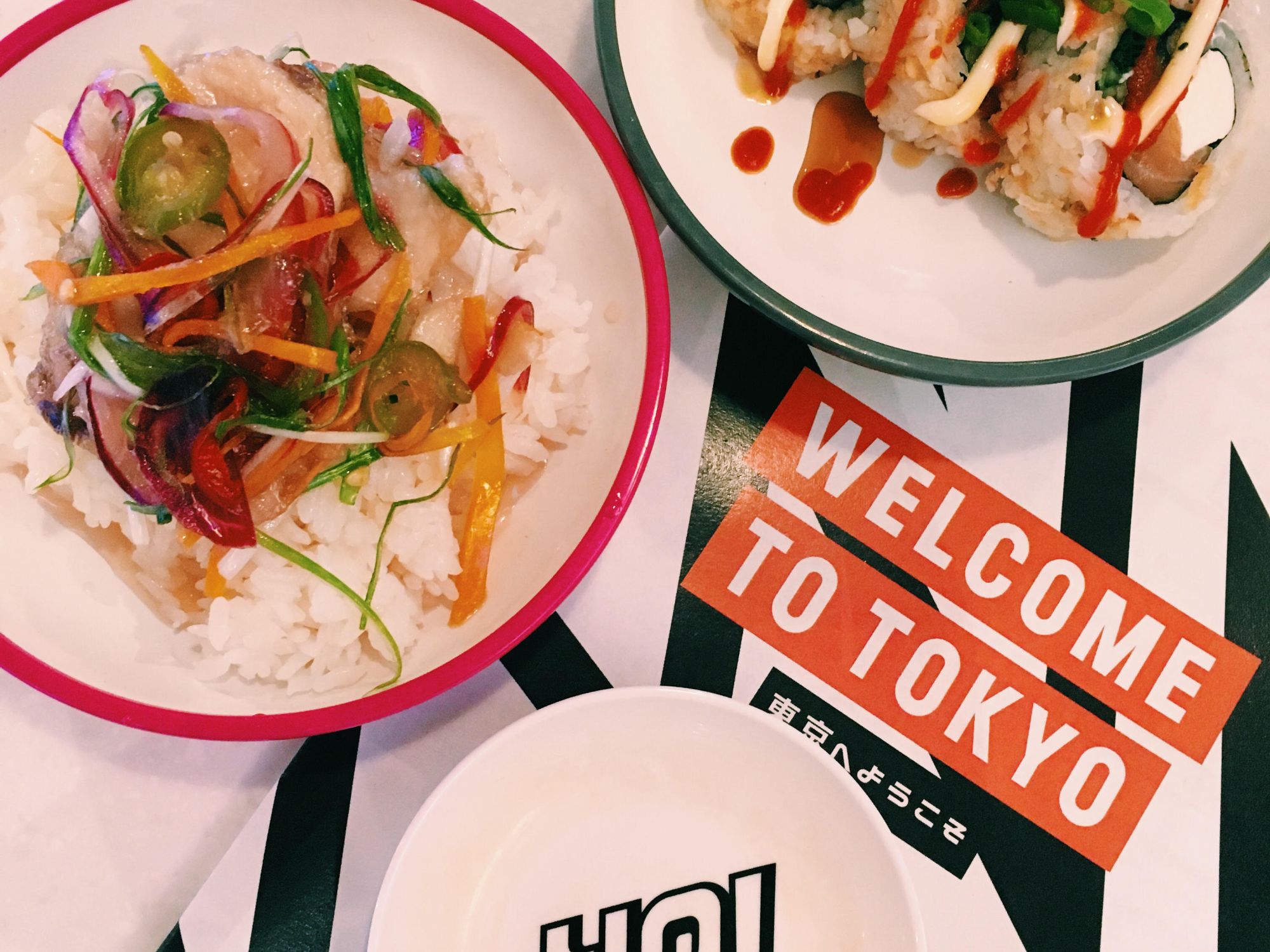 Potato salad at a sushi restaurant. What is the world coming to?

Recently, we got the opportunity to return to Yo! Sushi in the Short Hills Mall and taste of some of their newly debuted menu items. If you didn’t catch our first review you can read it here.

During the meal we got the chance to talk with Chef Mike Lewis about the inspiration behind some of the new menu items. Chef Lewis told us about his experiences in Japan and how those later translated into some of the more unique dishes on the menu. In this post, we’re going to give an overview of some of our favorite dishes from the tasting. What we liked, disliked, and what we’re definitely going to try again.

Maguro Katsu
This dish was born out of a late night bite to eat in a small Japanese restaurant. Chef Lewis told us he tasted this dish on a whim one late night after perusing the fish market in Japan.  Frankly, we’re glad he tried it because this was one of our favorite dishes of the night. For those who aren’t familiar, Maguro Katsu is a blend of Yellowfin tuna, onion and mayo with wasabi sauce. It’s basically a vamped-up version of a classic tuna fish. The Maguro Katsu comes with a crispy outer layer, which makes it ideal for dipping (in wasabi mayo to be specific, which was also aaaamazing). Saying we each could have eaten about 10 more is an understatement. Its also important to note that Rachel is not a big fan of tuna fish and still loved this dish.

Potato Salada
Now on to the infamous potato salad. An odd choice for a sushi restaurant to say the least. At first we thought having potato salad on the menu was a bit out of left field. When you think of potato salad you think of summer barbecues, hot dogs and hamburgers. Sushi doesn’t necessarily come to mind. But we’re always happy to be wrong.

Before we dug in, Chef Lewis explained that the potato salad was actually a form of yōshokuya, which loosely explained is a Western dish prepared with Eastern flavors. If you want to know more about yōshokuya and its history/influences, definitely check out this book. We are not by any means authorities on Japanese cooking, and we encourage you to do your own research!

On the menu, this dish is actually called Potato Salada, and it’s described as the Izakaya classic, which is a Japanese gastropub. The salad contains quick-pickled vegetables with karashi mustard mayo dressing. This dish is a delicious blend of savory flavors. The mustard mayo gave it just enough kick that we think this may outshine its distant cousin, your average summer potato salad. It also paired well with the other more traditional sushi dishes we ate.

Fish No Chip Roll
Fish and chips is such a classic comfort food we couldn’t resist trying this new roll. This tempura roll was the perfect combination of soft and crunchy. The roll is comprised of yellowtail tempura, onion, cucumber and wasabi sauce nori roll with chives. If you’re looking for a unique roll, that veers off the path of traditional sushi, the fish no chip is a must-try.

The Fish No Chip Roll was inspired by Chef Lewis’ native country of England. A unique spin on the traditional British fish and chips. This is the perfect combination of flavors from different parts of the world.

Clam & Enoki Miso
If you’re a fan of miso soup this unique spin on the classic miso is worth a try. The dish is made with miso broth with clams, mushrooms and wake with shichimi chili powder. The deep umami flavor really shines through with each spoonful. If you’re a fan of seafood, this miso contains whole claims. While the whole clams added a ‘fresh-from-the-sea’ flair to the soup, it did make it one of the more difficult dishes to eat. But we’re not afraid of getting a little dirty. We dug in with our hands to pull out clams and excess broth. A bit messy, but tasty all the same.

The Takeaways
It’s important to give credit when credit is due: Yo! Sushi was exceptional. From the welcome when we walked in, to the incredible hospitality of the managerial staff and our waiter, to the esteemed knowledge and skill of the Executive Chef.  Yo! Sushi at the Short Hills Mall is worth the trip if you’re in the area and looking to try a new spin on sushi.

We tried a ton of dishes and not all of them are included in this post, so go check out Yo! Sushi and let us know what you think of the new menu. Do you agree/disagree with our opinions? Let us know and leave it in the comments.